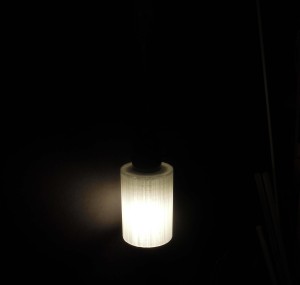 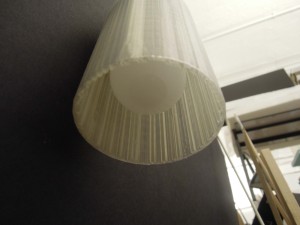 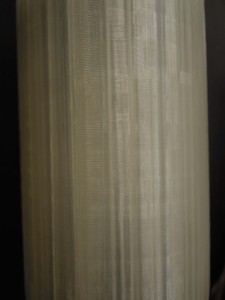 And in makerware (files can be found here: https://www.dropbox.com/sh/2lzfdfai0xgo9jv/vRNolF82gq): 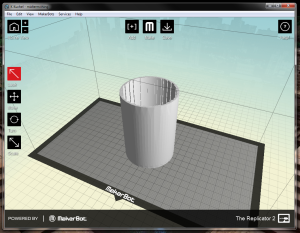 I modified my design significantly from the first idea, partly due to limitations of 3D printing, not the least of which was the material build limit. My initial concept was for something much bigger and with much thicker walls. This didn’t prove to be feasible on a bed size of 5x5x7.

A factor that played into this was building a cylindrical object with a 3D printer makes much more sense from the bottom up,  but it is also the longest dimension.

The design then evolved into an intersection of pipes extruded, copied and rotated from the twisted wireframe form I had developed. I could successfully export an STL file of this form, but it froze the makerbot software each time I tried to export and make it. There was also some concern about its fragility (the walls being only 1-5mm thick in order to allow light transmission), and the way the shape bowed out, and that this might fail.

In order to simply the design but retain some of the concept, I created a solid cylinder with differing wall thickness. The wall thickness varies in relation to the location of the original wireframe, where some isocurves were much closer together than others, and this was an indication of how the original sphere had been digitally twisted.

This change in dimension also meant a different choice of light bulb. I chose an LED bulb in order to make sure the temperature stayed low, and it had to be a lot smaller than a regular A19 form, but it did retain the medium base socket. 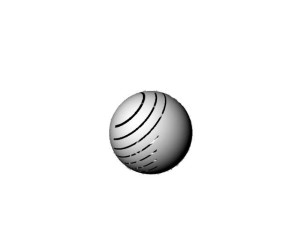 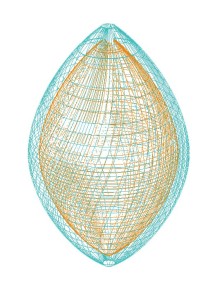 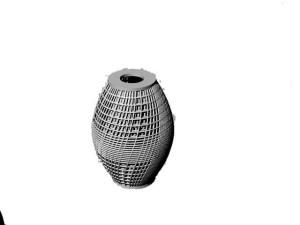