For our 3D Print assignment, I was interested in creating an object that would consider the the translucent qualities of the plastic filament and at the same time, serve a practical function.

Initial ideals were to print:

A stand alone “white board” calendar

A circular disc with patterns that could be attached to a projector to distort projected images.

Eventually I decided to go with a  candle holder, as I was interested in how the flickr of the flames would create shadows and patterns (analog forms of projections) and  I wanted to explore the illumination quality of the PLA plastics (recommended for first time printers). 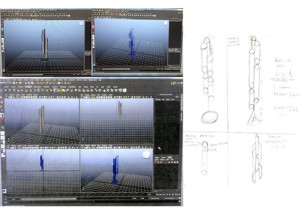 I wanted a simple and aesthetic to the candle holder as  I knew I was new to Maya and was fond of minimalist designs in an increasingly over consumerist world.  Bruno Munari and Alex Calder were two individuals I greatly admired for their design decisions and aesthetics.

Referencing Calder’s mobiles and Munari’s wind chime I decided to make a candle holder out of three distinct parts. It was hard to get the right thickness for the cylinders on maya as  I did not wanted it as thin as possible so the flame could be seen slightly through the walls of the holder. I make a few sketches and measured out proportions, followed by translating that into Maya via the Polygon mode. 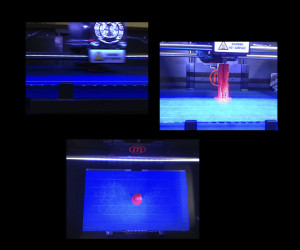 After presenting the class, I would like to re-print the candle holder in a different material, as I did not take into account how the fire retardancy of the PLA Filament.