For my final project, I combined a lot of material research and experimentation to create a few different prototypes to support my major studio 2 research.  The project speculates the future of wearable tech as it relates to a changing landscape:

…the current rate of greenhouse gas emissions, the projections are that the global average temperature will be 8 degrees Fahrenheit warmer than present by 2050. That amount of warming will likely lock us into at least 4 to 6 meters of sea-level rise in subsequent centuries, because parts of the Greenland and Antarctic ice sheets will slowly melt away like a block of ice on the sidewalk in the summertime. At 3 meters (almost 10 feet), on average more than 20 percent of land in those cities could be affected. Nine large cities, including Boston and New York, would have more than 10 percent of their current land area submerged (Source: UA’s Institute of the Environment.)

New developments are emerging everyday about this: http://www.theverge.com/2014/5/12/5710314/an-unstoppable-cataclysmic-glacier-meltdown-is-already-underway

A large portion of the world’s population lives in coastal areas. Even a 1-meter rise will affect 100 million people worldwide; higher sea level rises will affect even more. A 2- meter rise in seas is enough to submerge huge expanses of commercial and residential real estate, dispossessing people, forcing migrations away from coastal areas, and putting an end to the productive use of developed land along coast lines and flood-susceptible waterways. 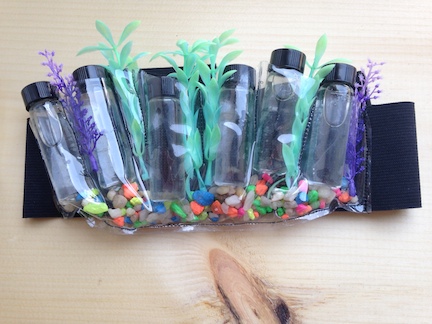 This piece is an experimentation in using bioluminescent algae as a “material” and functional light source for the wearer at night.

Bioluminescent dinoflagellates are a type of planktonic algae inhabiting coastal ocean waters. Individual cells of Pyrocystis species are relatively large, and slightly discernible to the unaided eye. At night, bioluminescent dinoflagellates emit blue light, called bioluminescence, in response to movement in the water. Bioluminescence becomes visible only after nightfall, driven by a circadian rhythm which is entrained by light-dark cycles. Bioluminescence can only be observed during the entrained night
period, and is best observed several hours after nightfall. Abruptly moving a culture of Pyrocystis from light to dark will not result in bioluminescence, due to the circadian control of this chemical reaction.

Here is video documentation of me testing the algae: https://www.youtube.com/watchv=rRy3maFHxKs&feature=youtu.be 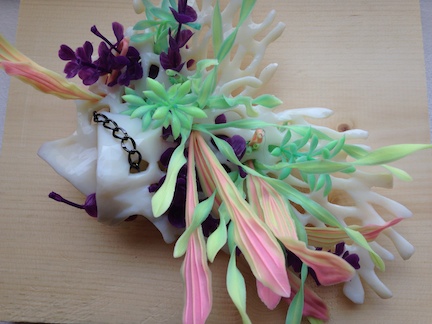 This piece is my interpretation of a wearable coral prosthetic that is designed to be able to support underwater plant life and sea creatures. I modeled the coral in Maya and printed the pieces on the Objet printer. Again I was interested in developing devices that promoted a symbiotic relationship between the human body and their immediate environment (in this case being an aquatic setting).

I also added bioplastics into the experimentation process to see what would happen. I had failed with bioplastics before, but this time I decided to follow the recipes that were successful from my classmates. 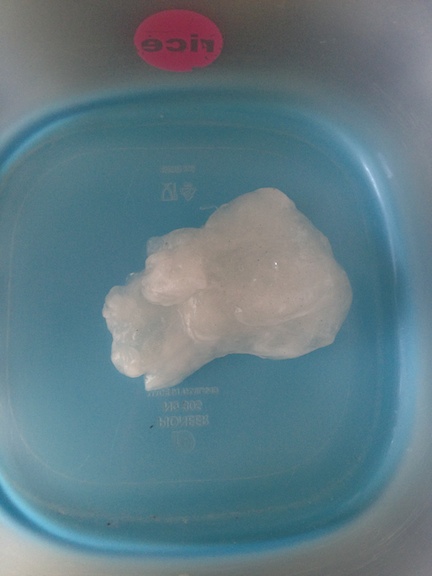 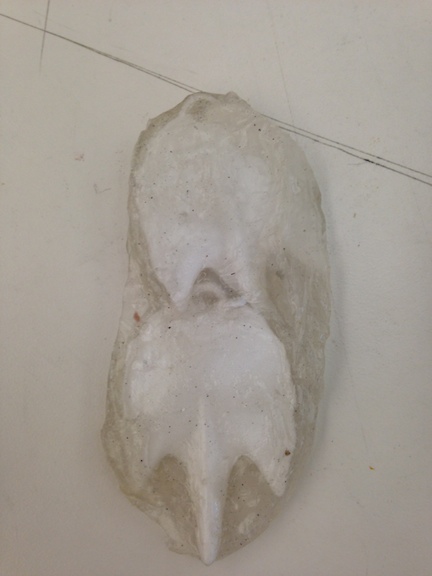 I tried embedding 3d printed scales that I made into the plastic itself to see what the result would be. It turned out to be interesting because the plastic added more flexibility to the pieces. I ended up not using this method for my final piece (which was a muscle sensor that triggered sound), but have ideas for more experiments with bioplastics in the future.