For  my 3D print I wanted to build some sort of appliance that I would use. My roomate had kept bugging me about how we needed an ash tray because we didn’t have one and we kept using bottle caps and cups. That same room mate and I share a love for science fiction so I decided to model a flying saucer ash tray. 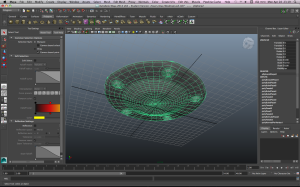 There were a few features I tried to include in my model. First and foremost I wanted it to look like a flying saucer so I modeled the disk shape first  and added  engine shapes top the underside. 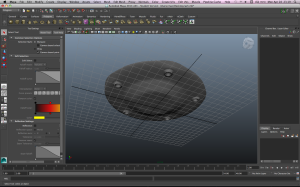 Then I pulled a section of the underside down so that I would have space to bring a dish down into. Using the same symmetry I put in the dish and a few dipped ‘holder’  sections. I pulled the dips inwards to provide a bit more surface area for the un-identified smoking object to rest on. 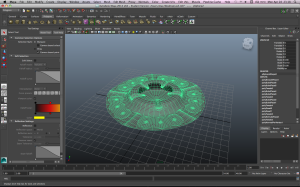 When deciding how big to make the dish compared to the saucer I tried to make enough space around the edge of the dish to allow for falling ash. I hate when people get ash all around the ash tray but not in it. This happened a lot when we used bottle caps. 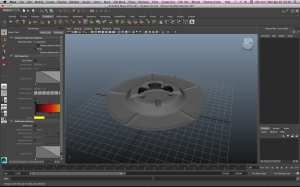 I divided the saucer ring into the same symmetry but rotated, slightly dropping each section so that they themselves were somewhat of a tray. 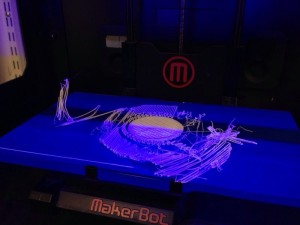 My first attempt to print was ruined because I had a check-marked supports, but no rafts. Because of this the supports had nothing to sit on except the makerbot’s base, and since I had extreme overhangs it wasn’t having it.

I re-printed it with a raft and it went much smoother. My print time was about seven hours. There were many supports and the disk was thin so it was quite difficult to remove all of them, took me a few hours and still wasn’t perfect. Next time i think i would print it vertically on it’s side instead of flat so that there would be less supports to remove. 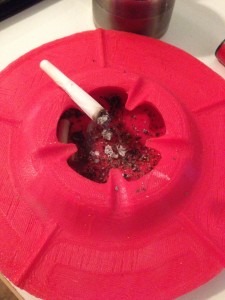 I have yet to cast my tray and recreate it with plaster, but in the mean time it’s been pretty useful… 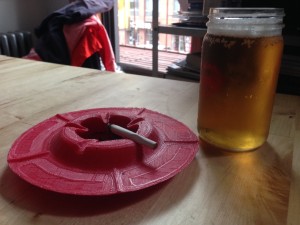 If I were to reprint my tray I would make the jet engine features on the underside bigger so that they touched the table (even with the bottom). When you touch the outer edges it wobbles a bit.