I continued my experimentation with bioplastics, aiming to find something that imitated the material properties of kelp, creating a thin translucent sheet material, that I could use with light.

My most successful initial piece had used Trader Joe’s all purpose gluten-free flour, which is an unknown proportion of rice flour and tapioca and potato starches: 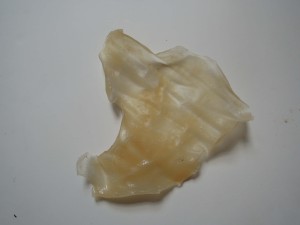 From the initial pieces I had created, I could see that the brown color in this piece probably came from the rice flour, and they were not as durable nor interesting visually. After a few weeks they were brown and cracking.

I did a little research about these starches and the different roles of the vinegar, water and glycerin in the plastic-making process. I found that tapioca and arrowroot had higher starch contents than many of the other starches I had tried or seen used and decided to choose these to experiment with.  I also decided to try guar gum, as it’s a substance used in a lot of gluten-free cooking to create pliability and binding.

The vinegar helps in breaking down starch chains, so making them more usable and the glycerin helps the starch chains slip over each other, giving more pliability. Water helps to mix it all up and make the ingredients workable.

In this further stage of experimentation, I created plastics using only one starch, cooking the following recipe on the stove until it thickened, like gravy: 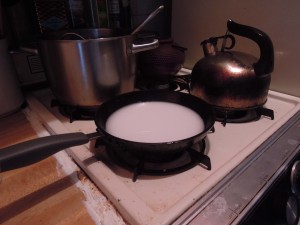 Arrowroot was very pliable and smooth to work with, and spread out readily, but it wasn’t very strong: 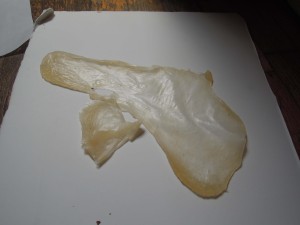 Tapioca was quite strong and “gummy”, but did not spread as easily into a sheet: 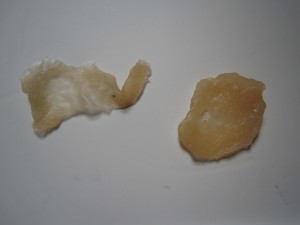 Guar gum was very hard to work with at all stages of the process, and made a very thick stiff ball of plastic: 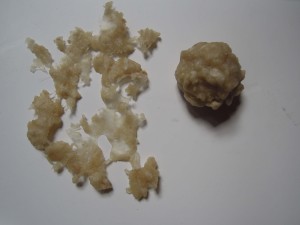 During this stage I was also experimenting with different ways to work with and dry the material. I found that air drying was not much different to drying in an oven at low heat (165 degrees Fahrenheit) for an hour or so. I also found a reliable way of making a sheet material was to place the hot cooked plastic between two sheets of baking paper on which I had spread a release agent (liquid castile soap), and then rolled it out immediately. 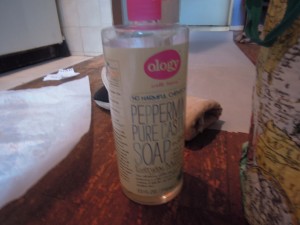 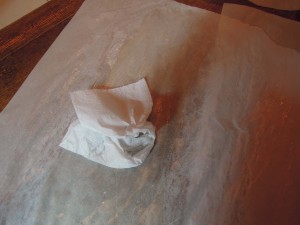 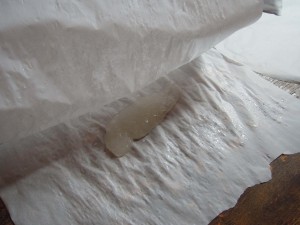 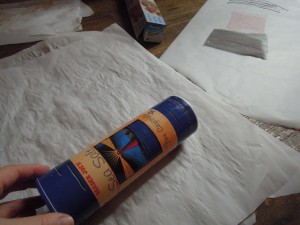 I decided to combine pliability and strength of the arrowroot and tapioca and the proportion (by volume) I found that worked best was one of 5:1 arrowroot:tapioca, with proportions of 8:4:2 of water, vinegar, glycerin:

I tried some white vinegar in place of apple cider vinegar, and it seemed to only alter the appearance: 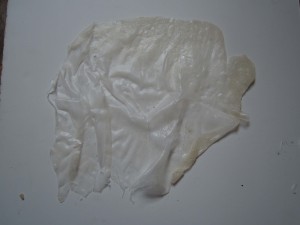 I also tried using little amounts of the guar gum together with the tapioca and arrowroot, and this wasn’t particularly successful, as it tends not to mix well. 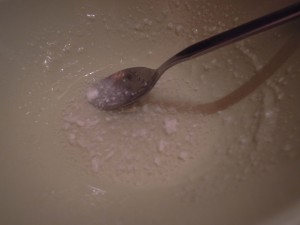 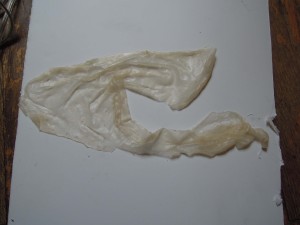 It does seem to add some extra strength to the material though so I was interested in finding a way that guar gum might work better. I tried combining it with vinegar before water, but this wasn’t successful once I added the water. I did finally manage to combine it successfully with a larger amount of water (1 cup to 1/4 tsp guar gum) and then mix that with the other ingredients, although this recipe didn’t seem to work out well in the oven, which wouldn’t be promising for working with light that emits any heat:

It is a very interesting texture however.

I also tried embedding other objects in the plastics to see if I could create some hybrid materials. This was somewhat successful, but it needed to be done before rolling the material out or applying any release agent – otherwise the material didn’t bind at all, and some materials still had no affinity – a fruit bag mesh just popped out of the plastic. 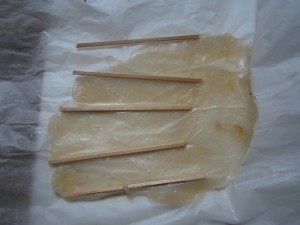 My most successful pieces of plastic came from the addition of black tea and coffee in place of some or all of the water.

With 2 tbsp black tea instead of water: 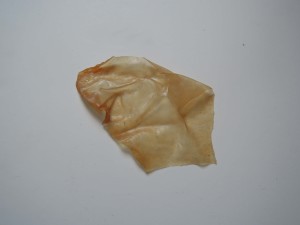 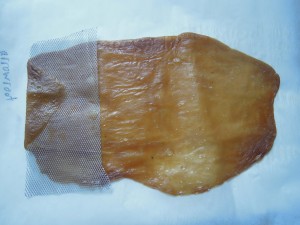 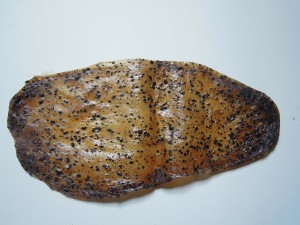 The tea and coffee seemed to add some ingredient which made the plastic feel more substantial and pliable, even when working with them hot, and yet they didn’t shrink. My guess is that this has something to do with either oils or tannins.

I was able to laser cut a piece with tea, and it took a surprising amount of power to cut. The material had varying thickness, and at its weakest it didn’t stand up to being transported but it was generally quite resilient. 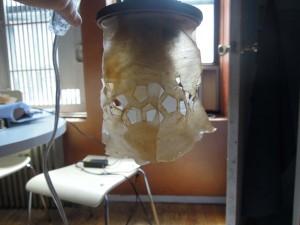 I tested the tea plastic with a 5W LED bulb which doesn’t emit much heat (it’s cool enough to touch after an hour), and the plastic was fine: 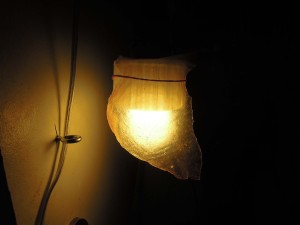 The coffee pieces were even more resilient, and the piece to which I added grounds was definitely the most successful piece in many respects, and was very interesting visually. 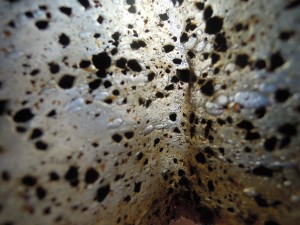 Many of the pieces I made had a lingering smell (even apart from the coffee which is very strong initially) and after seeing some other presentations, I wonder if my recipe could use less vinegar.

I would also like to continue further experiments with agar. Even though I was not initially trying to achieve a fully waterproof plastic, I feel it would be more useful to have a product which is a little more resistant to moisture. I soaked some of my tea plastics in boiling and cold water for a day, and while they weren’t completely destroyed, they did become very brittle once they dried out again. This however could be a useful property where the plastic life needs to be very short because it would break down much more readily.